Dark Parables Wiki
Register
Don't have an account?
Sign In
Advertisement
in: A to Z, Characters, Minor Characters,
and 7 more 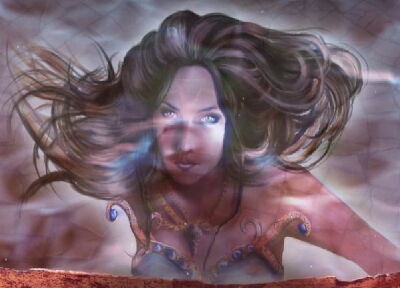 The Sea Goddess, whose real name is Thalassa, is a minor character who appears in the eighth Dark Parables game, The Little Mermaid and the Purple Tide, and its bonus game, Trusty John and King Bluebeard.

The patron goddess of seafaring men, Thalassa's imprisonment at the hands of King Alexandros lead her to curse his kingdom and his entire family.

It is possible that Thalassa is based on the primeval spirit of the sea, Thalassa.

Thalassa has the appearance of a beautiful woman with long, dark blonde hair, bright blue eyes and a pale complexion. She wears a long pale blue dress with intricate gold detailing. Strangely, old depictions of her show her having white hair.

Her demeanor can vary from peaceful and serene, to malicious and unmerciful, depending on her mood.

Like other Goddesses, Thalassa has been around since the beginning of time. Being able to control the seas and create storms at will, she has been worshiped by seafaring men and grants them special protection. She also has many animal familiars whom she loves deeply; one of these familiars was a goldfish that died at the hands of a greedy former fisherman. In retaliation for the goldfish's death, Thalassa cursed the man's tinderbox so that anyone who used it to gain three wishes would be cursed to be its slave.

Thalassa befriended King Alexandros of Prasino and assisted him in many battles against the Kingdom of Kokkino. As their friendship grew, she eventually trusted him with a powerful relic called the Staff of the Ancients.

However, the King was led astray by Chancellor Cassius and decided to betray the Goddess. He used the Staff to imprison Thalassa and used a blood binding ritual to bind her to his will, forcing her to serve his Kingdom. Infuriated by this betrayal, the Goddess cursed Alexandros and his family, turning the King into a monstrous crab, and his daughters into mermaids.

In order to break her curse and regain their humanity, she made each of his daughters locate a specific elemental orb. For the King to regain his humanity, he needed to use the five orbs to power up a machine that would strengthen and focus the Goddess' power. It took centuries for King Alexandros and his daughters to fulfill these tasks, but they did manage to do so.

The King had undoubtedly hoped that the Goddess' increased strength would further his own aims, but such was not the case. Once her power was magnified by the machine, Thalassa broke free of the chains holding her in Prasino and unleashed her fury on the very seas she once protected. Purple poison raged through the water and into the air above, swirling with all of the Goddess' pent up rage and frustration.

With the help of the Fairytale Detective, King Alexandros undid the blood binding ritual he'd done, freeing the Goddess from the final bonds held on her. Now placated, Thalassa calmed the raging storms and cleansed the seas of her poison. She disappeared from sight in a burst of fresh-water.

A King's Folly (from The Little Mermaid and the Purple Tide)

There was once a noble King who was embroiled in a war with a rival kingdom. He had the grace of the Sea Goddess on his side, and she offered him her Staff of the Ancients to wield in battle. As his power grew stronger, so did his thirst for more. With the advice of his trusty Chancellor, the King went through a Binding Ritual, which imprisoned the Sea Goddess and her powers for his favor only. The heartbroken Sea Goddess cursed the King to live an immortal life with the face of a sea monster, forever chained to his sunken castle. He realized he had been betrayed by the Chancellor, the enemy's planted spy. The Goddess gave him only one possible cure, in the form of five elemental orbs. The King's daughters, themselves transformed into mermaids by the curse, roamed the waters in search of the orbs. Centuries passed and only the last orb remained to be found. But as time passed, the King's obsession with a cure obliterated his compassion, until his soul became as wretched as his face.

Thalassa, the patron Goddess of seafaring men, protected the islands' ships. Among her charges were two rival kingdoms: Kokkino and Prasino. When a young King of Prasino ascended the throne, and the war between the kingdoms grew fiercer, he made overtures to befriend the Goddess. As they grew closer, she showed favor to his battleships and gave him her own Staff of the Ancients to wield in battle, but greed soon poisoned their friendship. The young King wanted dominance over the resources and trading of the sea, but he also coveted the power and guardianship of the Goddess for his own kingdom. The King and his trusted Chancellor devised a way to imprison the Goddess' soul, deep within the caverns of his island. Relying on Thalassa's trust in him, the King easily tricked her and enslaved her to his kingdom. Deceived, Thalassa seethed with hate as she was forced to do their bidding. She vowed revenge on the Prasino King and his descendants and waited for an opportunity to unleash her revenge.

The Jealous King (from Trusty John and King Bluebeard)

Bluebeard's father, an ancient Kokkino King, was renowned as a just and honest ruler. He had only one secret, shared with not one other soul: his Forbidden Chamber. The chamber held a painting of the beautiful Sea Goddess that he worshiped and adored all his life. Before he died, he made his adviser swear an oath that his son should never enter the room; if he did, a curse would befall the entire kingdom. As soon as the throne was his, Bluebeard sent his father's adviser to Prasino as a spy, hoping to gain knowledge of the enemy kingdom's secret weapon. The adviser had barely left the palace when Bluebeard entered the Forbidden Chamber. As his father had foretold, the beauty of the Sea Goddess in her portrait clouded his mind and his judgment. He married four times, taking the life of each young wife when she discovered the forbidden room. Bluebeard's kingdom slowly deteriorated, along with his sanity.

The Curse Is Born (from The Thief and the Tinderbox)

On a very misty day in a kingdom far away, a fisherman caught a goldfish who was no ordinary fish but a familiar of the Sea Goddess herself, who loved all of her animal companions very much. The fisherman had heard ancient tales of magic, so he made a deal with the goldfish: if she fulfilled three wishes, he would set her free. The goldfish agreed and brought him riches untold, true love, and the throne of the kingdom. With three wishes granted, the goldfish expected the fisherman to fulfill his end of the bargain. But the former fisherman had become a greedy King and couldn't part with such powerful magic. He put the goldfish into an old tinderbox until he needed more wishes, and it wasn't long before the goldfish died of sorrow. When the Sea Goddess heard about her friend, she was heartbroken and cursed the King's tinderbox to punish his greed; anyone who kept the tinderbox until the third wish was fulfilled would end up its slave, forced to obey another's wishes.

Quotes by the Sea Goddess

Quotes about the Sea Goddess

Destroying the kingdoms of Parsino and Kokkino 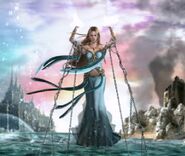 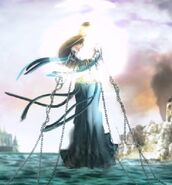 Appearing in a fountain 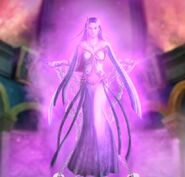 Raising from the Machine 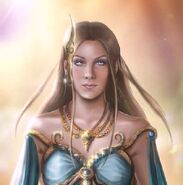 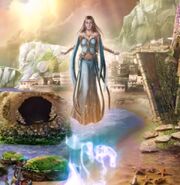 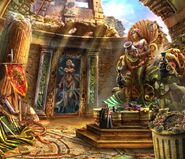 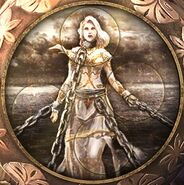 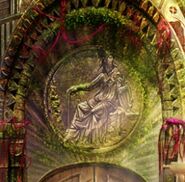 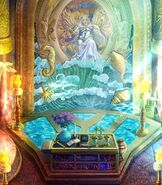 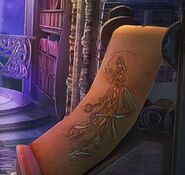 Sea Goddess on a Scroll in the Library

The Goddess on a Document About the Machine

Sea Goddess in Book About Staff of Ancients

King's Parchment on How to Remove the Curse 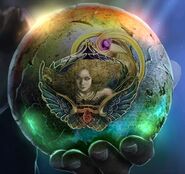 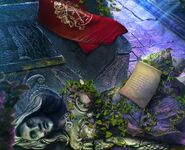 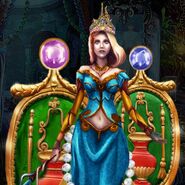 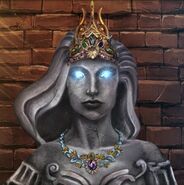 Statue of the Sea Goddess in Forbidden Chamber

Sea Goddess Temple Before the Curse

Room of Worship in the Goddess's Temple

Statues of the Goddess Outside Kokkino

Portrait of the Sea Goddess in the Forbidden Chamber 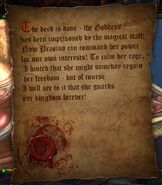 King's Parchment About Imprisonment of the Goddess

Scroll About People Turning to the Goddess in War

Plaque About Alexandro and Thalassa's Friendship 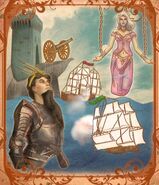 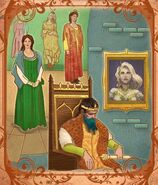 Sea Goddess featured in "The Curse is Born" Parable image
Community content is available under CC-BY-SA unless otherwise noted.
Advertisement